I’m fiinally clearing out the SD card after last Sunday’s Save Music in Chinatown 6 benefit matinee at the Grand Star, so here are some of the better photos. Unfortunately, I’m going to stick you with some words as well

The bill was unbelievable; we had two bands from China, Birdstriking and Chui Wan (above), as well as Deadly Cradle Death (a noisy side project featuring members of each band) and headliners Dengue Fever. Our new location was unbelievable, too. It was a second story spot in the heart of Chinatown with just good enough sound, a small stage, low ceiling, and bar for those who choose to drink. Right outside we were able to take photos by the Bruce Lee statue!

Deadly Cradle Death features Liu Xinyu from Chui Wan and Hefan from Birdstriking. The duo’s music super heavy and dark and has a little bit of hip hop tucked in there. At the tail end of a month-long tour of the U.S., having their friends in Birdstriking join for a few shows must have been a kick in the ass for Chui Wan, and this set was a real bonus for us.

Also note the poster showing a rough, black and white version of the show flyer featuring cool art by Miran Kim. How cool was my friend in France to let us use her painting to help kids in Chinatown?

In case you haven’t been paying attention, this was our sixth show. The bands have ranged from arty to punk to psychedelic with the latest lineup, but the killer bake sale has been a constant.

The shows have also become a real community, with familiar faces of friends, family, and music lovers of all kinds. Above is filmmaker Dave Travis, who runs Cafe NELA, and artist Vicki Berndt. They are among the many very cool people who attend all the shows and donate awesome stuff to our raffle, and I should have taken a dozen more photos of pals who support the cause like that. They’re the best. 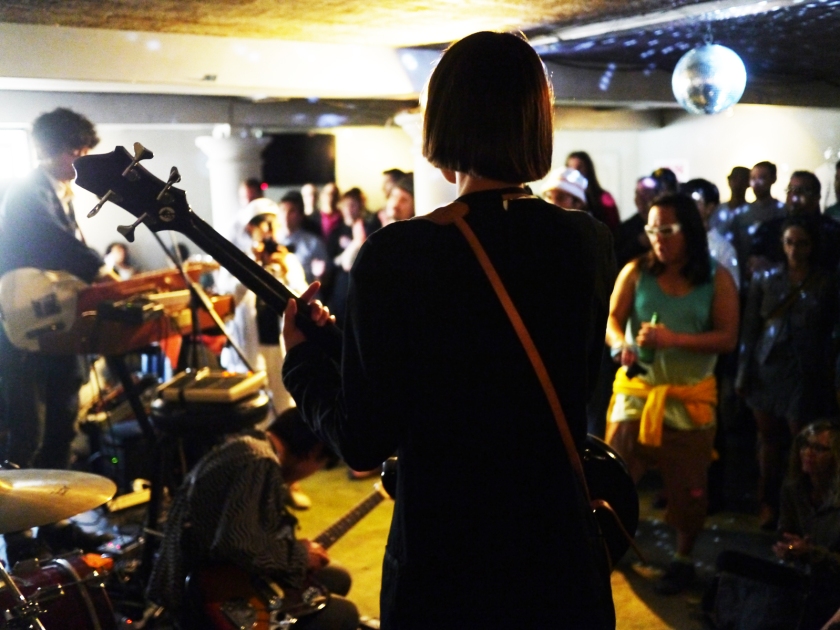 Sometimes it takes seeing a band two nights in a row to really get them, and I’m really glad I went out to see Chui Wan at NELA the night before. Chui Wan has a complex music vibe with a rhythm section that has a real angular post punk edge like Public Image Limited or Gang of Four. They’re really dark and heavy but also fun and the live show is mind-blowing.

The band played songs off its just-released, self-titled LP that you should track down. If you missed the tour, look for it (and other rad music from Chinese bands) at faroutdistantsounds.com.

Birdstriking were another ripping live band. I had been intrigued by the fact that the touring unit would feature two members of one of my favorite Beijing bands, Carsick Cars, but now I like Birdstriking even more! They have similar Velvet Underground riffs and Pavement melodies but angrier, political punk rock vocals. Awesome! Birdstriking is touring the U.S. all month and into July, so you should grab a chance to see them if you can before they had back to Beijing.

Tucked between the band and the Oriental windows in the photo below is Nate Pottker. He’s an audio producer, visual artist, musician himself, and good friend, and he has been a big part of Save Music in Chinatown since the very beginning. He does whatever he can to help, and at the Grand Star he helped to tame the room’s bare-bones sound. 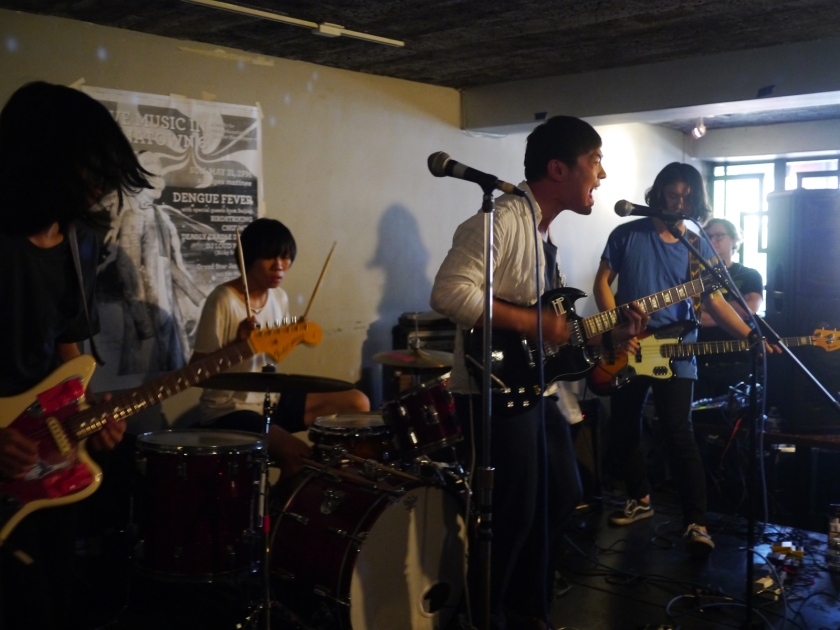 Did I mention that the Grand Star is a really cool location? It is not only one building over from Madame Wong’s and the Hong Kong Cafe, but the vibe of the upstairs room with a low ceiling and loud noise recalls the punk days of old, too. I couldn’t resist taking a photo in front of the old Hong Kong Cafe with Lisa from Frontier Records and Tony from Adolescents.

That’s DJ Loud Panda (Ricky Maymi from the Brain Jonestown Massacre) in the cowboy hat. He loves Chinese music to death and is responsible for getting so many up-and-coming, out-of-their-minds underground bands from Beijing to the U.S. We couldn’t have had Birdstriking, Chui Wan, or Deadly Cradle Death play our Chinatown show without his help.

After Birdstriking played, Liu from Chui Wan approached me with a Dengue Fever cassette and asked me to introduce him to the band. It turns out he’s a huge fan of theirs, so I dragged him around the club and got all of the members to sign it. Yet as the Dengue Fever began their set, the Chinese bands were packing up their gear and rushing off to San Francisco. What a bummer, but Liu seemed stoked just to be there.

We’ve had some badass lineups at Save Music in Chinatown shows featuring legendary bands that played the Hong Kong Cafe in the ’70s and ’80s. Having underground musicians from China in Chinatown is totally cool for a completely different reason, but still perfectly fits the idea of underdogs coming together through a subculture and building a community.

I still can’t believe Dengue Fever played our little show. I mean, they play much bigger venues and seem to be on NPR every other week, but seeing the six-member band cram onto to our modest stage and playing without monitors was rad. It was like seeing them play a house party or basement show with a lot of feedback, sweat, and family vibe. Amazing.

Although the band had donated as signed record to raffle off at one of our previous shows, I never dared to ask if they would actually play for us. But my friend Josh, who manages Dengue Fever, brought up the idea and how could I say no? And then it actually happened.

Before the set started, bassist Senon talked a little bit about the importance of music education and how playing music benefits people of all ages, and then added that I wrote the first piece and took the first photos of Dengue Fever when they started. How cool is it to have been friends since then, witness the band not only remain intact but evolve so far, and then see them play our show?

I also love how the Castelar kids who attend our shows not only benefit from the dough raised that goes toward music eduction, but also get to see awesome bands like Dengue Fever, Birdstriking, Chui Wan, and Deadly Cradle Death carry their own gear up the stairs, set up their stuff, and play in small rooms. They see that music isn’t just played at the Hollywood Bowl or something that pop stars do. Hopefully, they’ll be inspired by the DIY aspects too. And see that the lamest of parents can put together a cool show!

Thanks to everyone who attended, played, donated raffle goodies, contributed to the bake sale, spread the word, and helped make the show happen in any way. Thanks to Tony Quon of the Grand Star for giving us a new home as well Human Resources for giving us a great start. We couldn’t do it without everyone’s help.

All money that came in went straight to the cause, with the venues, bands, bake sakes, raffle goods, and everything else being donated to the Friends and Alumni of Castelar Elementary School, and through this year’s shows, we have been able to pay more than $10,000 of Castelar’s annual bill of $50,000 for music education. On top of that, and just as important in my opinion, we are raising awareness, getting people together, and building a scene. It would be rad if you joined us when we start again next school year.

Did I mention that the shows are totally fun, too? Or that you can bring your family if they can handle it? Kids under 12 are free. Follow this blog or join the Facebook group page for information on upcoming shows…