While editing Giant Robot magazine, I got to interview a lot of cool filmmakers and actors. So I was pretty excited when Eloise told me she wanted to interview Daniel Wu for a school assignment to write about a famous Chinese person. Why not? He’s a longtime friend and I thought conducting the interview in Mandarin would be an outstanding project for her dual-language fourth grade classroom. I traded some texts and Eloise placed a phone call to Uncle Dan last May.

As Into The Badlands is about to conclude its third and final season, I asked Eloise to translate the interview into English to get us viewers ready for its long-awaited return. And if you are a fan of hardcore Hong Kong-style martial arts and choreography, dig the energy and production value of cable shows like The Walking Dead, and appreciate the humor of Nick Frost but haven’t checked out the AMC series yet, don’t miss the double premiere on Sunday, May 24, and Monday, May 25! Prepare to be entertained, addicted, and blown away every week.

Eloise: Good, thank you for doing this.
Daniel: No worries. Are you ready to start?

Eloise: Yes. So my first question is, what did you want to be when you grew up?
Daniel: When I was 13, I wanted to be an architect.

Eloise: And when did you get into acting?
Daniel: In 1997, right when I graduated from college. I went to Hong Kong, and someone asked me to be in a TV commercial. Then the director of my first movie, Yonfan, saw the commercial and looked for me.

Eloise. Oh!
Daniel: It was just that easy.

Eloise: Wow!  Since you weren’t experienced, was acting extra fun? More difficult?
Daniel: More difficult, because I had to work on two things: How to act and how to speak Chinese. Both at the same time!

Eloise: When you were filming in Hong Kong or China, what was the most fun movie you worked on?
Daniel: My most fun movie was One Nite in Mongkok. Of all my films, that is my favorite.

Eloise: What’s a difficult thing about acting that most people don’t know about?
Daniel: A lot people think that acting is really easy, and you just go to the location, go home, and that’s it. But you have to do a lot of homework. There’s more homework and preparation than actual work. And filming just one hour of a movie can mean four or five hours on the set.

Eloise: When you were in China, you were already a big star. Why did you come back to work in America?
Daniel: I didn’t give up on China, but I’m an American so I can do English films, too. Now I do both.

Eloise: Is Into the Badlands the hardest thing you’ve ever worked on?
Daniel: Probably. I work really hard on it—more than in movies. For Into the Badlands, I have to do kung fu every day for 10 hours and it’s exhausting. It’s also easy to get hurt.

Eloise: Do you think your work has had a positive effect on the world?
Daniel: Um, I hope so! I’m not trying to change the world, but I hope at least a few kids who watch Into the Badlands will want to learn kung fu. When I was a kid, I watched movies and wanted to learn kung fu. I think that would be a good influence.

Eloise: Which of your movies should us 10-year-old kids to watch?
Daniel: The movie I just finished, Tomb Raider. I think it’s got a good message that girls can be heroes, too.

Eloise: When are we going to El Cholo to eat green corn tamales with you again?
Daniel: I hope we can do it soon. Your dad introduced them to me and I really like them! Maybe next month I’ll come and we’ll have them.

Eloise: Yes!
Daniel: Are there any more questions?

Eloise: When did you meet Daddy?
Daniel: In 1995 or 1996, I really liked reading Giant Robot magazine. I wrote a letter to your daddy saying I really liked it, and if they needed help I would contribute. The first time we met was in New York City. I was visiting my sister and don’t know what he was doing there—probably Giant Robot stuff.

Eloise: That’s all. Thank you!
Daniel: Good luck. I hope you get an A on your report. If you don’t, I’ll come to your school with my sword!

Watch the final episodes of Into The Badlands Season 3 on AMC and stream the previous episodes on Netflix, Amazon Prime, etc. And, yes, Eloise got an A on her project and, no, Eloise is not allowed to watch the series yet! 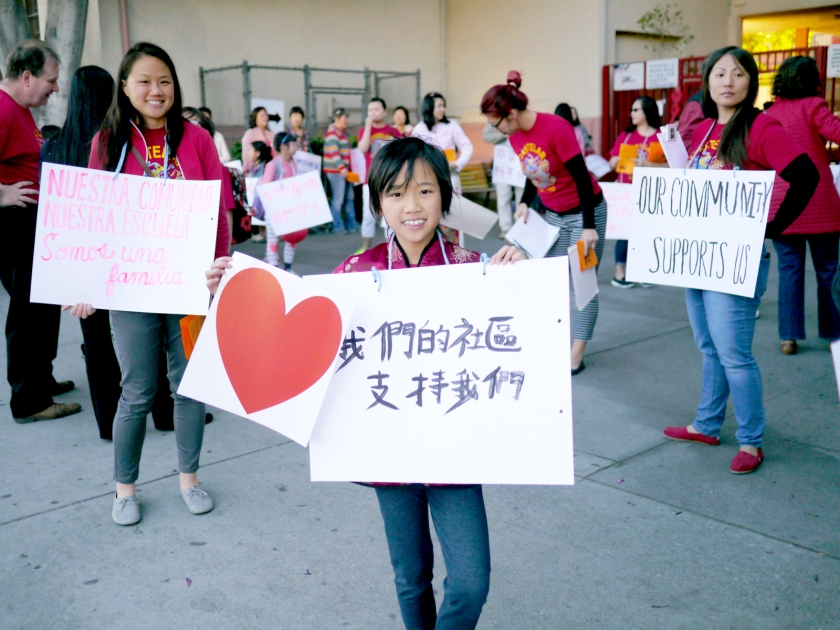 Even if you just skim my blog, you know how much I love Chinatown and Castelar Elementary. The historic neighborhood is where my immigrant grandparents hung out and where I went to wedding banquets and dim sum as a kid, and it’s even cooler that punk bands like X, The Weirdos, Germs, and Dils used to play there at the old Hong Kong Café. And now that Eloise goes to school at Castelar, Wendy and I spend a lot of time in the area, eating at O.G. restaurants like Golden Dragon and Philippe as well as newer spots like Scoops. We are having a blast organizing all-ages punk matinees at the Grand Star to raise money for the school’s defunded music program, too. 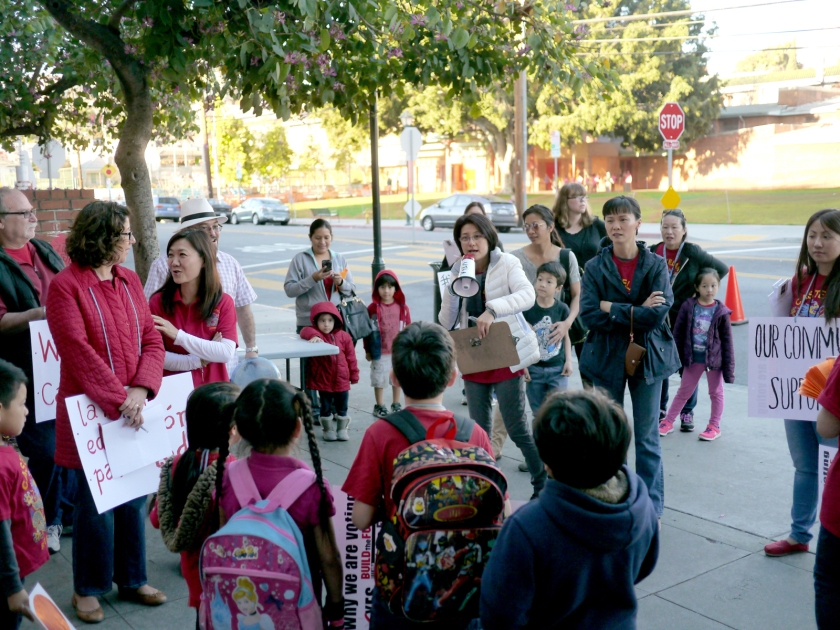 So of course we would be involved in this morning’s “Walk In” to celebrate Castelar. Even though a lot of kids are immigrants and English learners, our school excels and scores very well in standardized testing. The Mandarin Dual Language program is wildly successful, too, and provides a model for larger programs that have many more resources. And although our campus is in the inner city, it is a real safe haven without the bullying, gangs, or violence that many other public schools suffer from. The staff, teachers, and families of Castelar love the school and about 200 of us were proud to demonstrate it.

There  was also a less gushy side to the event: to raise awareness about a charter school’s interest in co-locating at Castelar. Representatives from LAUSD have already toured our campus and tagged multiple rooms as vacant. It doesn’t matter that many are used for music, art, drama, or P.E.

There’s a law stating that charter schools must be given access to empty classrooms. If Castelar were a dying school, that would be one thing. It isn’t. Castelar is a unique and thriving center of the community. For the school to be cut up, deprived of resources, and possibly drained of students (those nice uniforms and organic lunches sure look great) is unconscionable. For us families to be left out of the process altogether, unforgivable.

And for an affluent charter school to move into Castelar’s space is to dismiss its enviable level of instruction under difficult circumstances. It will physically divide the campus and take away rooms that are being utilized. In addition to losing space for music classes (instruction that the school pays for with help from our Save  Music in Chinatown shows), art, drama, and P.E., we will have to share our computer labs, library, lunch area, and blacktop. The school budget can’t afford to pay for a nurse every day of the week, but when she is present I doubt she’ll  turn away an ailing charter school student.

If children from the charter school want to attend Castelar, they should come. We have awesome kids, excellent teachers, and that amazing Mandarin Dual Language program (which actually needs the extra space to grow). There’s also easy access to dim sum on minimum days. But cutting into our school and taking away from our students and community is not acceptable.

We appreciate all the staff, teachers, kids, and families who showed their support for Castelar this morning. Wendy, Eloise, and I look forward to working with the community to protect and grow our school. Please join us (that’s our friend and fellow Castelar parent Angelica painting signs with us). We can use all the help we can get! 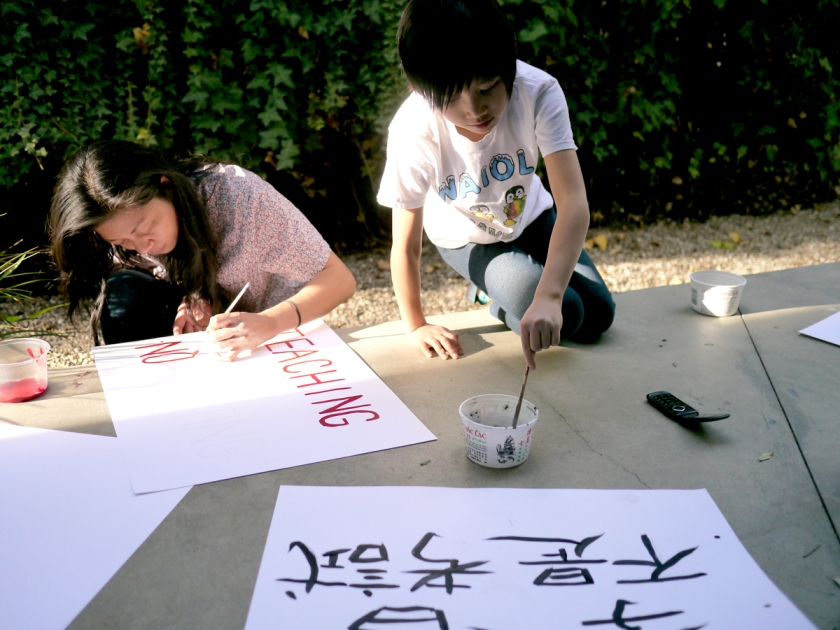 Postscript: A few people have asked what they can do to support Castelar. There are petitions and gatherings in the works to stop the charter school from moving in, but the very best thing to do in the big picture is to spread the word about how Castelar is a uniquely excellent public school and for families to send their kids there. If you live in the neighborhood, check it out. 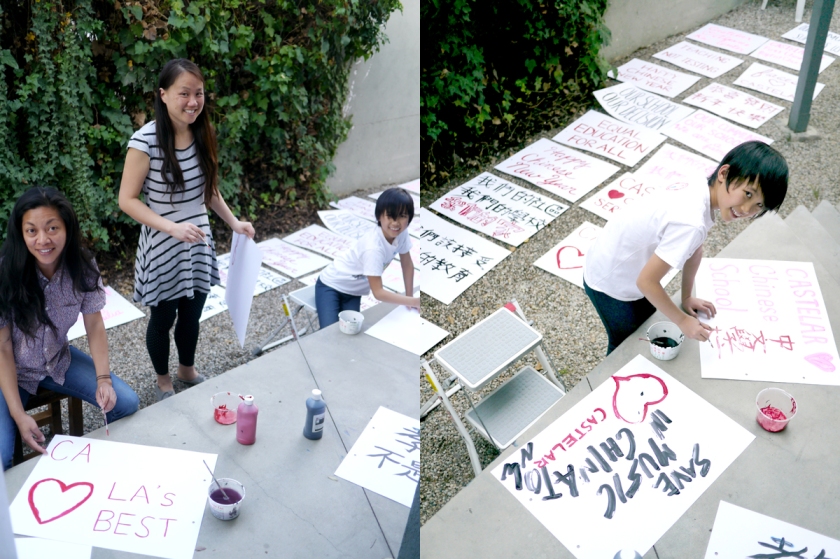 And if you have children or know children who are approaching Kindergarten age, consider enrolling them in the Mandarin Dual Language program. Wendy, Eloise, and I live about 5-10 minutes away from Chinatown but found it easy to transfer to Castelar because it offers something that our home school doesn’t. There are slots for non-LAUSD kids to attend, as well, and it’s a great option for those who work downtown.

I miss leaving flyers at record stores, magazine stands, coffee shops, and friends' coffee tables and refrigerators. But here are two free online events to check out!
I’m saddened that my sister’s children’s clothing store @shopkumquat in Eagle Rock will be closing due to the rising cost of rent. I’ll miss picking up and dropping off Eloise and my nieces, bumping into friends and family, having holiday craft shows and sales, and just hanging out with @angelyn_dlg there. And how lucky was Eloise to get to wear the clothes and match her cousins all the way up to a year or so ago? Or for @wendyjanetlau and me to get to help make fabrics and designs?
Way back when, Giant Robot mag had a few events at Beyond Baroque, including film screenings of Eric Nakamura and Michael Idemoto’s Sunsets and Jon Moritsugu’s Fame Whore with a projector onto a sheet, as well as a Emily’s Sassy Lime and Kicking Giant doubleheader. Wow. How cool was it to do stuff like that at the legendary poetry and literature spot in Venice where Beatniks hung out and John Doe and Exene famously met!
While @faces.castelar hasn’t been able to host in-person events like movie nights, talent shows, fundraising concerts, etc., we have been organizing FACES Presents online Q&As with creative people who do interesting things, as a way to uplift and inspire the school kids of Chinatown, families, and friends.
Good mail day: We got a cool care package from @themuffsofficial with original gear and reissued wax! Check out their shop at @fulfillmentmerch and a portion of sales goes to the ALS Association Golden West Chapter, too!
Loading Comments...
Comment
×