Wow. 37 years ago, I went to my first San Diego Comic-Con. My brother Greg and I, along with our friends Mike and Brian and our moms who drove us, went to the U.S. Grant Hotel. Or was it the old Convention Center? It certainly wasn’t the El Cortez, which came back for one year.

It was a lot different then–mostly Comic Book Guy (like in The Simpsons) selling back issues on folding tables. Maybe some movie posters, big little books, lunch boxes, and action figures with some Star Trek and swords and sandals vendors as well. Certainly, nothing that warranted special sections in The L.A. Times or sponsorship by Entertainment Weekly.

Despite how commercial and difficult to attend the Con has become, I still love going and it’s even better that we can take our kids. As much as I’m guilty about talking about the good ol’ days, I think this is a golden age for cosplay culture.

It used to be barbarians and Trekkies, before the anime scene evolved. Now there are more superheroes, movie characters, obscure mascots… There are probably more strong women characters than ever, too.

But even better is introducing her to friends. After attending the Con so long–including 15 or 16 years as the editor of Giant Robot mag at the booth–I’ve made a lot of friends in the indie and underground comix scenes. How cool is it for Eloise to start reading comics and meet creators like Jeffrey Brown? I got to know him through Clumsy but she and all of her peers love his Jedi Academy books.

And now that Eloise has been reading my old Mad paperbacks, she appreciates meeting Sergio Aragones even though she doesn’t realize what a legend he is to fans of comics or regulars at the Comic-Con. As for Daniel Clowes, when Eloise reads his comics down the road, I’ll show this picture to her.

I still get excited about meeting artists, too. This was the first time Garfield creator Jim Davis has attended a Comic-Con, and I not only attended a panel about his art and career but waited in line for about 90 minutes to get his autograph. I used to think his comics were cheesy but have grown to appreciate his simplicity and sincerity. Garfield is like our generation’s  Nancy. And how cool is it to stumble upon Stan Sakai’s booth? Usagi Yojimbo is as indie as it is O.G. 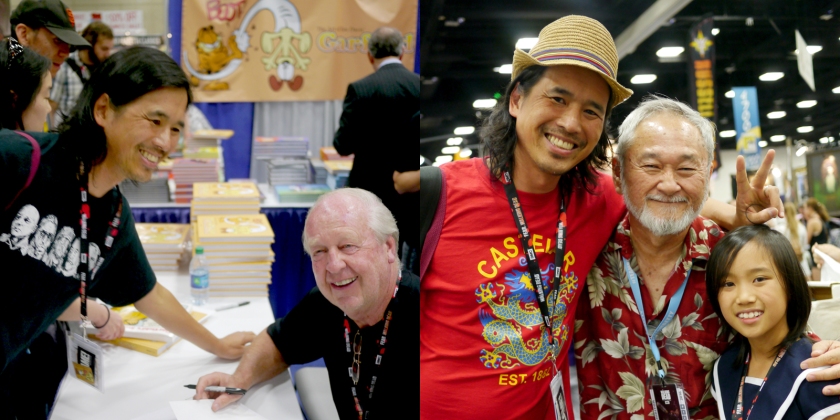 More badasses: Paul Gulacy of Master of Kung Fu fame and Lawrence “Raw Dog” Hubbard of Real Deal infamy were in attendance. These guys are lifers and their comics are timeless manifestations of ’70s spy and kung fu cinema and ’90s gangsta rap. Where else can you meet artists like that?

I read new stuff, too. I met Keenan Keller when we worked in the Giant Robot garage and now he makes indie and underground comix like The Humans, Galactic Breakdown, and Force Majeure. Eloise won’t be touching those issues again until she’s much older. Bongo Comics, on the other hand, are perfect for her. Thank you, Matt Groening. Let’s go see a kung fu movie together soon. 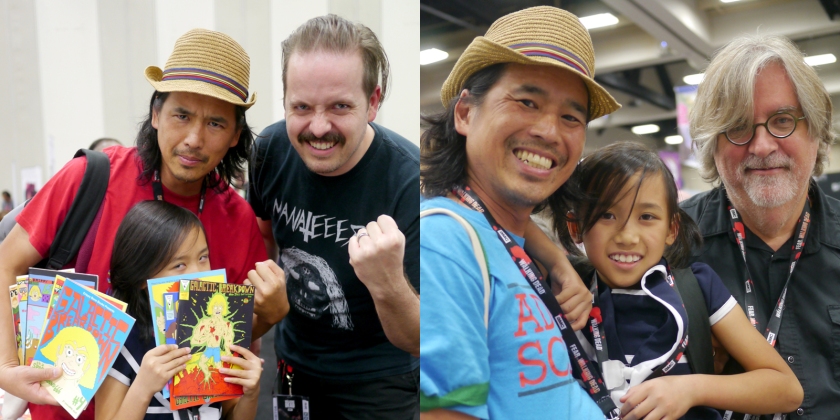 And thanks to Senator John Lewis for his work in civil rights, advocacy for gun sense, and great comics. We didn’t get in line early enough to attend the panel about March 3, the final installment of his autobiographical civil rights memoir co-authored by Andrew Aydin  and illustrated by Nate Powell, but crashed the children’s march to the floor. How cool was it for Eloise to be a part of that?

Also, I must have taken three or four different photos with different friends and Snoopy because who is cooler than Joe Cool? Maybe Brian Flynn at Super 7?

The latest addition to Super 7’s impeccably curated, manufactured, and packaged retro toy empire is a mini figure of Steve Caballero. I interviewed the Bones Brigade skater for Giant Robot decades ago and if he doesn’t remember it he sure did a great job faking it. What a nice guy.

And what about the people behind the scenes? John Pham from Epoxy or Peggy Devlin from Drawn & Quarterly. Artists like LP or Aaron Brown who attend not to sign autographs or talk on panels but check out the Con because its a blast.

And exposing Eloise to not only gigantic statues of Marvel heroes but indie artist friends like Susie Ghahremani, Martin Hsu, and Debbie Huey is empowering and cool.

I love Comic-Con for all the people and reasons that I’ve written about but the crazy thing is that the 150,000+ other attendees love it just as much for their own reasons. They may follow different comics, television shows, movies, and other forms of pop culture but are just as obsessed.

Although Eloise is into a lot of the same stuff that I am at the moment, she’ll develop her own tastes as she grows up and I think that’s great. I just want her to be interested in culture, critical about what she consumes, and see that she has an active role in growing it and sharing it, as well as building communities. Perhaps even at Comic-Con if we can keep getting tickets…

With luck and help from friends (you know who you are), we’ll see you there in 2017.

The first time I heard of Boris was when my friend and number-one photographer Ben Clark told me he wanted to shoot them for Giant Robot mag. Combining doom metal, psychedelic rock, shoe gaze, and stoner jams into one badass package, how could I deny the Japanese trio? We interviewed Boris on the Pink tour and I’ve been obsessed with the band ever since, catching every local show and buying up every album, single, split record, and an assortment of T-shirts I could afford since then as well. I even went on tour with them and Damon & Naomi selling merch (above).

So I was stoked to find out that the band’s U.S. label Sargent House was not only issuing a tenth-anniversary edition of Pink as a triple album on splattered vinyl with unreleased Forbidden Tracks recorded during the same sessions, but that the trio from Japan would be supporting it with a tour that kicked off at the Casbah in San Diego during Comic-Con. Holy crap! One of my all-time favorite bands playing a killer record at one of the coolest venues during my favorite annual event? How could I not shoot some live shots and ask double-necked bassist and spokesperson Takeshi some questions about the release.

Do you recall Pink’s creation vividly or, looking back, were you just out of your minds?
We started touring very frequently around 2003 and made a lot of recordings, and were incredibly busy. At that time I was still working my day job, and I’m after finishing work at 10 p.m. I’d go into the studio for intense jam sessions and recording until 1 a.m. The thrill I got while on tour, in turn, drove the desire to produce. The band’s speed of doing things also rapidly increased. Pink was released in 2005.

Since then you’ve toured so much, had a little girl join your crew, and explored many other genres of music. Where were you musically and what you were thinking back then?
We are constantly considering, “What sound is new?” At the same time, we are finding something that we can enjoy. The sound that we create has to excite us. Generally, if you take the sounds of what may be said to be a used-up old genre and mix it with “Boris,” you get a chemical reaction and a different, new sound is born. But because we are just doing something that is absolutely fun, there is no deliberate thought of “Let’s try this genre next” or anything like that whatsoever.

Can you talk about some of the Forbidden Songs? Had you listened to them or played them since they were recorded? Do they stack up differently than the songs on Pink?
For the reissue, we gradually started listening to them again. A large part of the material consisted of songs that I had no recollection of. That may be because those songs made us say, “The influence in these songs is too obvious,” and at the time recording circumstances didn’t allow us to bring them to fruition. The latest post-production techniques have made this release possible.

You’ve collaborated with so many heavyweights like Michio Kurihara, Keiji Haino, Merzbow, Sunn O))), and Ian Astbury. Are there others that you’ve thought about working with, if not for real then in your dreams?
Well, the actions of our band are not like a business but really more like a lifestyle. Encounters with others are important, but we have never thought about doing something like that from a business perspective. They come out of friendship and meetings. I think that a chance encounter can give birth to empathy and respect, and those feelings as well as that person and the music they create resonate mutually, at last resulting in a meaningful collaboration. When the timing is right we’ll probably collaborate with someone again.

I thought it was cool and also a great fit when your music was used in the Jim Jarmusch movie, Limits of Control. Jarmusch, Christopher Doyle, Bill Murray, and Boris–so many of my favorites in one place! Do you like movies? Would you like to hear your music in other movies?
Actually, whenever I have time I try to watch movies as much as possible. Especially, Atsuo watches movies often. It was a real honor to work with Jim. Within our sound creation there already existed some sense of “visual sound,” and for someone to comprehend that side of Boris, and also to give some acknowledgement for that, really pleases us. If we have a chance we’d love to try doing an entire soundtrack.

A lot of us fans go nuts trying to get every version of every piece of music that you release. Are there bands that you obsess over? Or maybe an author, comic book artist, or even something like Snoopy?
From my childhood, I’ve always been really into collecting things. Since going on Boris tours I started buying snow globes at many of the towns we’d go to, and I probably have about 60 now. These past 2 or 3 years I haven’t been buying them, but perhaps I’ll start back up again?

You’ve toured the U.S. so many times now. Are there places or things you look forward to every time? Are ever still surprised by anything when you’re on the road here?
It’s always fun to see new cityscapes we haven’t been to before, and along the way we’re amused by peculiar souvenirs at rest stops, and we continue to be amazed by the scenery of vast deserts and huge open areas of land that just don’t exist in Japan. So yeah, we still find it really interesting. Also, Atsuo is vegan so going on tour gives him a lot more delicious and more readily available vegan options than in Japan. I look forward to the food during the tour as well.

See Boris on tour now and get the incredible triple LP at the merch table or your favorite record store!