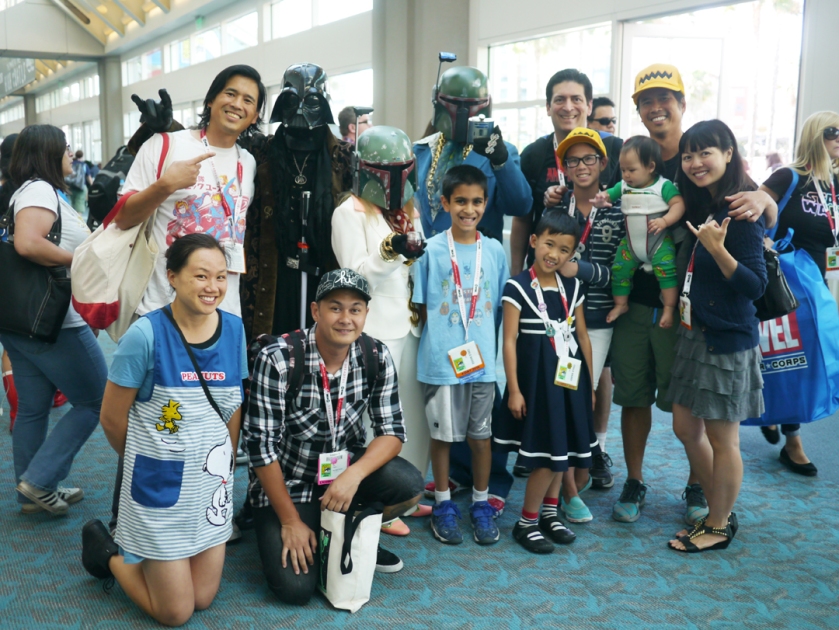 Last week, I went to the San Diego Comic Con. My brother and I have only missed one since 1979 when we were little kids who collected comics. Most chatter about the Con entails movie stars, entertainment news, and how hard it is to get tickets. But what about the less popular panels or how you get to see so many rad people from all over the place–longtime friends, badass artists, and personal heroes, too?

I already wrote something about the panels I attended this year, so here’s a rundown of some of the people I saw.

Lalo Alcarez is the guy behind the La Cucaracha daily strip, which I’m a big fan of. He and Ask a Mexican writer Gustavo Arellano have been working on a new cartoon for Fox called Bordertown. It expands on their celebration of La Raza and underdogs everywhere, and at his panel my brother Greg and I got to see some advance footage that cracked us up and is sure to offend people to the right of us. We went to his signing afterward and he was a real cool guy.

Every year we see Los Bros Hernandez and every year we buy something that at least one of them can sign. This time I got Yeah!, an anthology about an interstellar girl band drawn by Gilbert Hernandez and written by Peter Bagge. Talk about a dream team; how could I have missed it when it first came out? It never gets old meeting and supporting legends of underground/indie/punk comics and it was awesome to see that Beto’s daughter Natalia is making mini comics now, too.

Later on, we caught Beto on a panel that included Peter Bagge. Of course, we tracked him down afterward, took a picture, and made him sign Yeah! I love Bagge’s comics and totally would have brought Hate and some records for him to sign if I knew he was going to be around.

Above right is our friend Mike Shah, who attended the same second and third grade class as Greg and me. All of us discovered comics together and started going to the Comic Con together, too. We must have been going into fifth or sixth grade at the time, and who knew that Greg would live in San Diego and all of our families would be crashing it his place for the Con more than three decades later? All that’s missing is our long-lost childhood friend Brian Brown, our fellow comic collector and D&D player with the un-Googlable name…

Can’t not mention Brian Tse, without whom I wouldn’t have been able to get into this particular Con. And this is not the first time he has helped me secure a badge. There have been times during the mad rush to purchase passes online when I’d feel defeated and start getting philosophical, but he’d come back with, “You have to go! You’ve been going since you were a kid and can’t stop now. I’m going to help you get a ticket.” He was a great GR softball teammate and huge mag supporter, too, and I’m glad we actually got to attend the Con on the same day this year.

I was also glad to see David Walker, who I got to know from Giant Robot’s days in Indie Alley. He published and wrote practically all of Badazz Mofo, which featured essays and interviews with just about every living Blaxploitation star. Now he’s writing Cyborg comics for DC. Love it when the good guys (or ladies) win.

Greg and I were stoked to see Carlos Ezquerra, co-creator of Judge Dredd, at the 2000 AD panel, and then I tracked him down at the booth. One doesn’t cross with creators with such legendary status very often. How could we not buy  anthologies to have him sign?

I was waiting to buy a sketchbook from Geof Darrow when Gaston Dominguez-Letelier from Meltdown walked up to whisk him away to a panel. Gaston was an early supporter of Giant Robot mag and I still enjoy stopping by his shop to buy comics and chat with him, his brother, and all the cool people who work there. What a small, awesome world we live in. Of course they would know each other and of course he allow Geof to pause for a quick photo with him and me.

I’ve seen Matt Groening at the Drawn & Quarterly booth before, but I swear I don’t go there to stalk him. What a nice guy and what a huge supporter of comics and culture. Always love talking about new comics, new music, and everything else that matters.

I like to hang out by the  Drawn & Quarterly booth because it is run by the nicest people with the best taste, but this time I kept circling back to have my 25th anniversary book signed by the artists and staff that were present. My shoulders were killing me from lugging that awesome brick of a book for three days. Above right, that’s Marc Bell, Julia Pohl-Miranda, and Michael DeForge.

Talk about the stars aligning. I missed Saturday and our friend Daniel Wu’s panels but returned on Sunday along with my family. My pal from Hong Kong Ryan Hui (a.k.a. The Stay Up) happened to be in town and was able to get a ticket for that day, too. After scoring the toys he was looking for, he let me drag him around to all of my indie comics spots as well as the cute stuff that Wendy and I wanted to share with Eloise.

Of course, we stopped by the Giant Robot booth to say hi to Eric Nakamura. I had a lot of fun working our booth when we made the mag together. Wendy did both graphic design for the publication as well as doing shifts at the booth and Eloise’s babyhood was well-documented in the last two years of the mag. I miss the mag and Eric, but can’t complain about our excellent 16-year ride.

More legends at the Con. John Lewis was a Civil Rights activist who became a Senator and then a graphic novelist. Impressive resume, and very cool to spot him at the Top Shelf booth and get a quick photo of him with my family as well as my niece. When they get older, Eloise and Saoirse will be blown away to realize that they met Lewis–at Comic Con!

My family has gone on pilgrimages to the Schulz Museum numerous times and we’ve taken photos with the World Famous Super Beagle at the Con before, but Snoopy is still a real big deal to my family. We went to a panel featuring graphic designer Chip Kidd and Creative Associates honcho Paige Braddock, and the Schulz art book they’re working on will be amazing. Missed a photo with Paige, though. Rats!

So many friends from all over the place. How cool to spot Ashley Mae from Keep Company shoes just one week after seeing her at Anime Expo? Where will we see her next Sunday?

Eloise was a little disappointed by the quantity and level of cosplay compared to Anime Expo, but was pretty excited to see Sailor Moon and Tuxedo Mask toward the end of the day.

I used to work with Michelle Kim back in the Giant Robot garage, and now she’s at the Mimoco booth. I’m glad we’re back in touch and she always makes our visits to Comic Con more fun (and fashionable with her Simpsons and Rilakkuma gear). Thanks, Michelle!

The Con was being shut down as we were walking by Super7 at the moment when the founder/my friend Brian Flynn was standing next to Darth Vader! An awesome ending to another awesome Comic Con. Hope we’re all able to get in next year…

I remember when Eric introduced blogs to the Giant Robot website. I didn’t think I had much to share, but in his estimation I did enough interesting things people would want to read about. I’m still not sure if that’s been the case, but it is pretty fun writing outside of the magazine format.

Even after the mag stopped publishing in 2010, I kept up my GR blog. Pictures from punk shows, zine and movie reviews, an occasional Q&A with an artist, and recaps of gatherings like Comic-Con and Agenda–the best parts have always been simply sharing the rad stuff that my friends do.

However, even as I type this, giantrobot.com is being rebuilt as a more dedicated retail site. My blog there will be on the cutting-room floor.

Since the the rad stuff keeps coming, I’m going to continue blogging on this site. Less art, more rock. Less cool stuff and more crap about being a dad. Doesn’t that sound awful? We’ll see how it goes.

Please read, share, and let me know what you think.