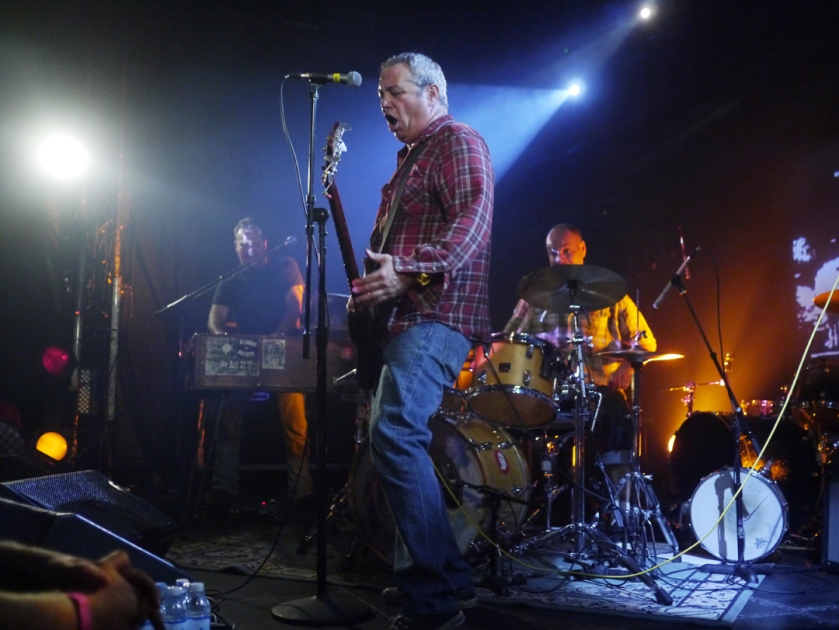 I’ll gladly pay to see Mike Watt play anytime, anywhere, with any configuration of his kick-ass musician friends, but throw in a special set by Jenny Lewis and then add a gang of top-shelf comedians on top of that? Damn. On top of that, the Fun Lovers Unite! show was a benefit organized by my friend Josh Mills and his pal Maccabbee Montandon, inspired by the memory of the former’s brother. Asher Montandon was shot and killed for no reason in the summer of 1992, planting the seeds for them to start the Fun Lovers Unite! fund-raising concert and awareness campaign to promote more sensible gun laws.

Once I got through the line that snaked down Glendale Boulevard and entered the sold-out Echoplex, I immediately ran into Josh (above, with me) and told the human being how proud I was of him and Mac (above, right). People get outraged all the time. But how many actually do anything? And if they do, is it close to being this awesome?

Shannon Watts from Moms Demand Action (above, top right) was present to describe her organization’s cause and thank us ticket purchasers and the bands for supporting them. Emcee duties were handled by the self-deprecating-to-the-point-of-being-paranoid comedian and writer–not to be confused with the MMA fighter with the same name–Ali MacLean (above, bottom right), and first up was the 12-string, take-it-easy atmosphere of The Everyday Visuals (above, left). 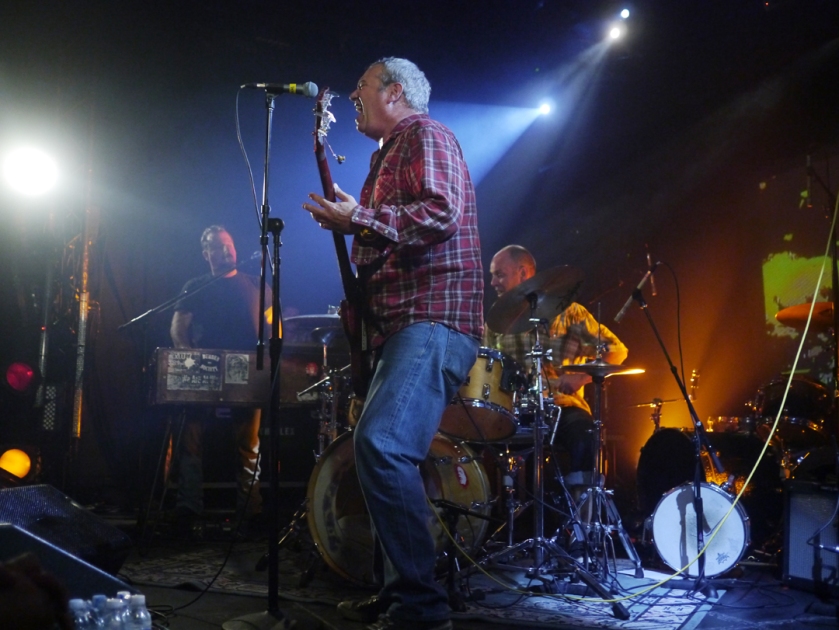 I was there to see Mike Watt & The Secondmen, who were fresh off a 53-gig tour supporting their latest mind-blowing opus of post punk, post jazz, and all rocking rhythm and heaviness, Il Sogno del Marinaio. Although the masterfully ripping set was sort of a homecoming, the fresh faces in front seemed to be camping out for Jenny Lewis. Even so, Watt and crew never hold back one iota from their utmost musical potential when they’re onstage, whether it’s at a packed venue, in a backyard, or in front of a sea of future fans. So satisfying, every time.

Jenny Lewis kicked off her special appearance with “Just One of the Guys” before busting out a couple of Watson Twins collabs and then an acoustic Rilo Kiley song. I’m actually not super familiar with Lewis’s catalog, but it’s obvious that she is a consummate musician and commanding performer and her fans were totally freaking out. How cool to check her out close up for a solid cause.

I don’t know much about comedy, either, but the 20-minute sets that followed were funnier than shit. Kurt Braunohler (above, left) explained why he’s going to hell and Sarah Silverman (above, right) described her summertime survey asking straight, male, God-fearing audience members across the country if they would let Him come in their mouths. Meanwhile, Tim Heidecker (below, left) had a harder time picking up the microphone than Soap-on-a-Rope and Neil Hamburger (below, right) revealed the secret history of the Echoplex. (Two words: Marcel Marceau.)

And just like that the show was over, leaving an empty stage with puddles of sweat and drink spilled by America’s Funnyman in front of a bunch of smiling people. The topic of more sensible gun laws was never actually addressed head-on by the performers, and that was fine with me. The idea of simply surviving and having fun is the best argument, after all, and Josh and Mac conveyed that perfectly in their first Fun Lovers Unite! benefit gig. Can’t wait to see who they line up for the next one… 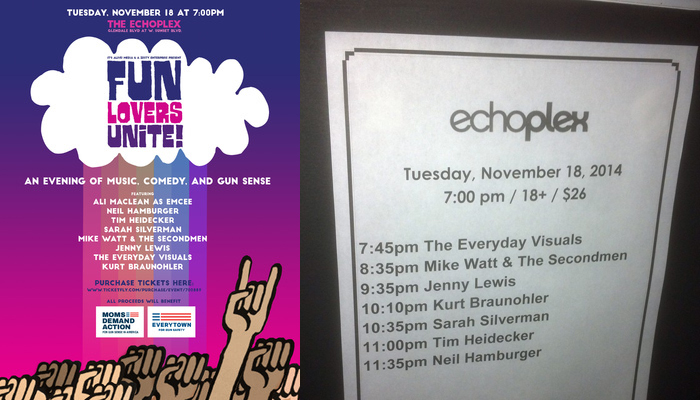 Join the Fun Lovers Unite! group on Facebook for more coverage and information on future shows…