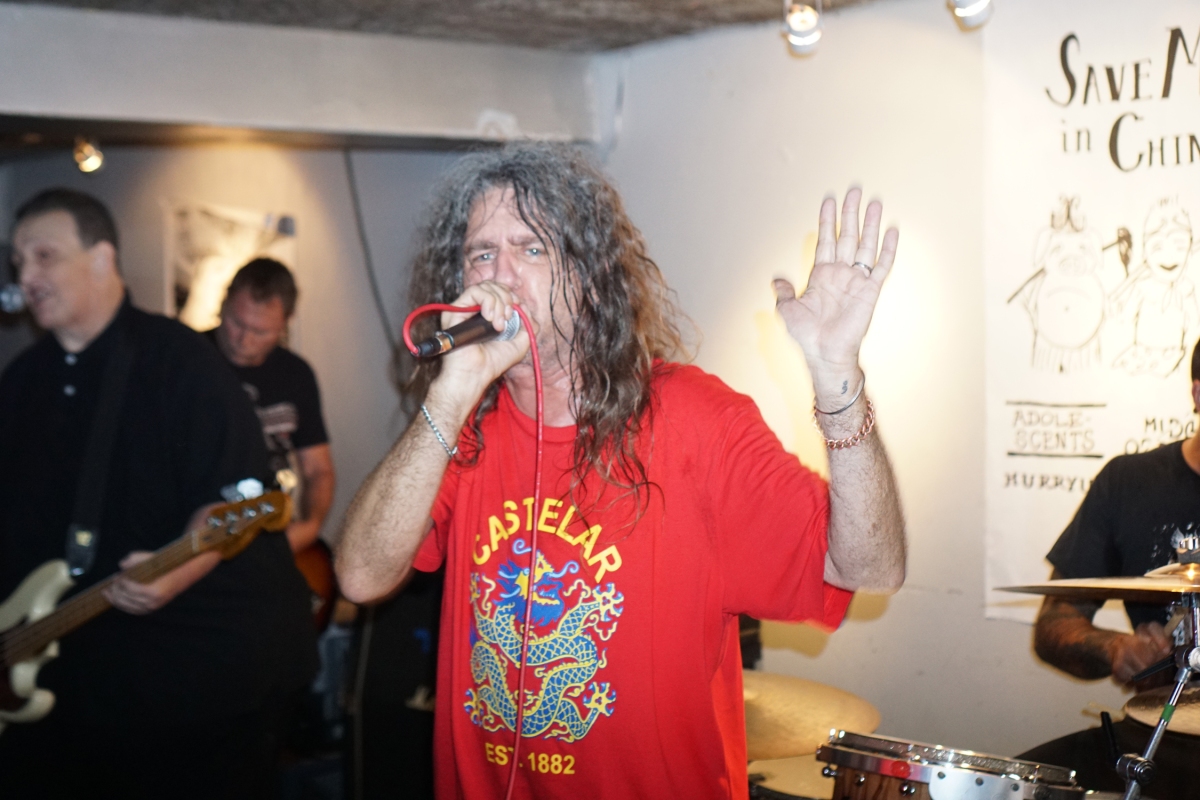 Our fifteenth Save Music in Chinatown show was going to be amazing. I felt like the lineup was carved in stone before the fourteenth show (Lois, Dub Narcotic Sound System, PHAG featuring Phranc and Alice Bag, and Mike Watt & The Missingmen!) even happened. But timing didn’t work out and the deck got shuffled leaving us with only a super-secret headliner that we couldn’t promote because we didn’t want stage divers and slam dancers to crush little elementary school kids at our all-ages matinee. And what sort of lunatic would pay 12 or 15 bucks to see a show if they don’t even know who is playing? We can’t have that sort of weirdo around our children!

But like Tang Sanzang in his journey to the west or Tampopo in her ramen shop, we received help from the coolest collection of legends and oddballs. Each band really deserves its own story.

Cringeworthy is the humblest type of group–a tribute band. But they play the songs of Cringer and J Church, two punk bands that I not only loved but was actually close to. The singer and guitarist Lance Hahn was a dear friend and J Church would not only stay with me when they toured but Lance would come over just to hang out. He was a songwriting and DIY animal, who had his own record label and zine, and we shared a lot of overlapping interests outside of punk rock: Hong Kong movies, vegetarian Chinese food, Hawaii. It meant a lot to me that he dug the magazine I helped make, and it was brutal when he died at the young age of 40–not long after he was supposed to play my Chinese wedding banquet (a precursor to our Save Music in Chinatown shows and a story for another time).

But Cringeworthy was formed to play an anniversary show at Epicenter Zone, where Lance volunteered, and features Bay Area and Sacto veterans of the punk and hardcore scenes including Kamala from Cringer and Kamala & The Carnivores, Frank from Star Fucking Hipsters and The Love Songs, and Lory and Anthony from RAD and Sick Burn. Anthony is also my cousin! How cool was it that he would get his Lance tribute band to come down to Los Angeles to play our benefit and even ask our daughter Eloise to sing one of my favorite songs by him: “Confession.” There is so much to love about that particular moment–J Church, Lance, Anthony, Eloise, Chinatown– it almost hurt to watch.

I knew it was a long shot when I asked my old friend Maggie (ex-Bangs) if Hurry Up might be interested in playing our humble benefit show. Who would come all the way from Portland to play for free? But judging from her radio show, I knew that she was not only a fixture in the PacNW’s underground music scene but also an aficionado of all cool music including early L.A. punk. It turns out Maggie had been talking to Kathy and Westin about embarking on a short tour the day I contacted her, and it might not have hurt that her partners’ other band The Thermals had just announced a breakup. All that plus cheap airline tickets made the unlikely trip possible .

It was very cool to see our little benefit show from an out-of-town visitors’ point of view, especially because they were so stoked! Seeing little kids from Chinatown mixed with legends of L.A. punk bonding over music and cookies must have been a surreal experience, and the power trio played like they were out of their minds. Conversely, friends in the crowd were blown away by the power-pop infused, garage punk ‘n’ roll band’s musicianship but also their pure joy. After seeing Hurry UP play three ripping sets in two days (one with Save Music in Chinatown friends and LA punk legends Alley Cats) and getting to hang out with them so much, I was very sad to see them drive off to San Diego.

The Unhushables didn’t even exist when we started planning the show. But not more than an hour after their Facebook page launched, which was a big deal to me because I was a huge fan of Franks’s old band Big Drill Car as well as Dave and Art’s Supernova, I asked my friend who managed them if they might be interested in playing our show. Just like that, they said yes and I had to try hard not to fan out. I probably saw Big Drill Car two or three dozen times in the early ’90s, and have fond memories of Supernova pulling up to Jabberjaw in their space van.

More or less, I kept my cool and even asked them if they’d be interested in making and selling a small run of CD-Rs with hand-printed sleeves (since their LP was only available digitally) and  invited them to KXLU they could introduce themselves over the airwaves while promoting the show and cause on the Molotov Cocktail Hour (they stayed for the entire show). The nicest humans! The most fun set! The music is entirely new but us old fans could clearly detect the weirdness of Supernova and exuberance of Big Drill Car. I hope they play again and often.

I have been trying to get Midget Handjob to play our show for around a year now. Their name is PG-13 (possibly R) but the music is mind-expanding to all ages with an all-star cast of noise-making punkers who can also play hard jazz and noise and Keith Morris reading fever-dream stories on top of them. Yes, the original singer of Black Flag, Circle Jerks, and OFF! It isn’t easy to wrangle seven schedules when every contributors plays in multiple bands but somehow the stars lined up for our show. And I didn’t find out until two weeks before the show, when Keith sent a message saying, “Weren’t we going to perform?” Okay!

We simply opened doors a little earlier and Keith was cool with us tweaking the combo’s name into Midget Oddjob, since flyers were going to be hung at our daughter’s elementary school. But nothing about the set was dumbed down, watered down, or made kid friendly. The band is a real jewel of L.A. punk that doesn’t play very often and they burned a searing impression into every single ear and brain cell with their supremely and equally trippy and psychotic jams. Freak out at the all-ages matinee!

The Adolescents were our secret headliner–again. At our fifth show, founding member Steve Soto was announced to play a solo set and then the entire band played. I don’t think that either Mike Watt & The Secondmen or The Gears knew who was going to play after them! For Sunday’s matinee, our fifteenth, we did a better job of spreading the word to friends, family, and anyone who follows our updates and had a comfortably packed room full of curious kids, punk lifers, and supporters of the cause. Maybe having Lisa Fancher, who released their first and best-known Blue Album, be our deejay was a clue, too?

Before the set, singer and longime champion of our cause Tony Reflex talked about how the band has played Chinatown many times since 1979 and described his landmark moments in the historic neighborhood, including getting arrested for the first time and proposing to his wife. I would add their shows for us at the Human Resources gallery and now the Grand Star. For a band with that sort of legacy and imprint in L.A. punk to give our cause their seal of approval  not once but twice (and Steve did come through with a solo set on top of that) means the world to me. Their set was a full-on rager starting with “Brats in Battalions” and ending with “Amoeba,” peppered with more classics and brand-new faves in between (“Flat Earth Stomp,” “5150,” and the title track off their excellent upcoming Cropduster LP will blow you away). They don’t hate children and none were crushed.

Of course, Save Music in Chinatown shows are more than concerts and not just because there was a kickass bake sale and little kids in dancing around in front. We raise money for music education in the inner city, where many students are immigrants, English learners, and underserved kids who don’t necessarily get opportunities for a thorough music education outside of school. We build on the punk rock tradition of the neighborhood’s old Hong Kong Cafe (where first-wave bands like X, Black Flag, Germs, Weirdos, Go-Go’s, Bags, and Dils played) by inviting artists who played there back in the day as well as newer members of the underground music tradition, both local and from as far away as China. We mix up immigrants and underground music, my favorite subcultures, that have crossed paths in the very same plaza as our shows at the Grand Star and unite them for the sake of kids, art, and the future.

After helping to start and edit an independent magazine for 16 years, where I met my graphic designer wife, I figured Wendy and I would never do anything that cool again. Who knew we would be able to embark on something like this with old and new friends, building a scene, supporting public education, and exposing kids who can handle it to underground and DIY culture? Who knew we would be able to do it and make a difference in the neighborhood where my immigrant grandparents and in-laws found community?

My observations and gushing are mind-numbingly similar after each of our shows, and they must be a blur to anyone who actually checks in on my posts. But as our fifth school year draws to a close, I am more shocked than ever by the events we have shared, allies we have made, and how much our daughter has grown alongside the project. She has become our in-house artist, top spokesperson, and guest performer as well as lead inspiration. I didn’t get exposed to zines, DIY, or indie culture until I was a teenager and it blew me away. What can stop someone who is empowered by those sorts of things as a child?

With Eloise entering her final school year at Castelar, it’s hard not to anticipate the end of our project looming. That means we will have to make those three matinees especially great. (What bands want in? Do you dare miss a show?) It also means finding ways to make its impression go beyond 18 shows with 150 -200 people attending each afternoon. (An article for someone? A full-on book? The words may be dull, but we sure have some great photos.) Instead of taking a break this summer, I plan on doing a lot of digging into how these shows have reflected and affected the community, thinking about making the transition from school booster to activist, and considering where to go from here. Hopefully the posts won’t be too dull and we’ll still see you when school resumes in the fall. Have a great summer!

If you don’t follow my feeds or blog, join the Save Music in Chinatown community on Facebook for updates on the next show.